Thousands of comics on Marvel Unlimited? What you need to know 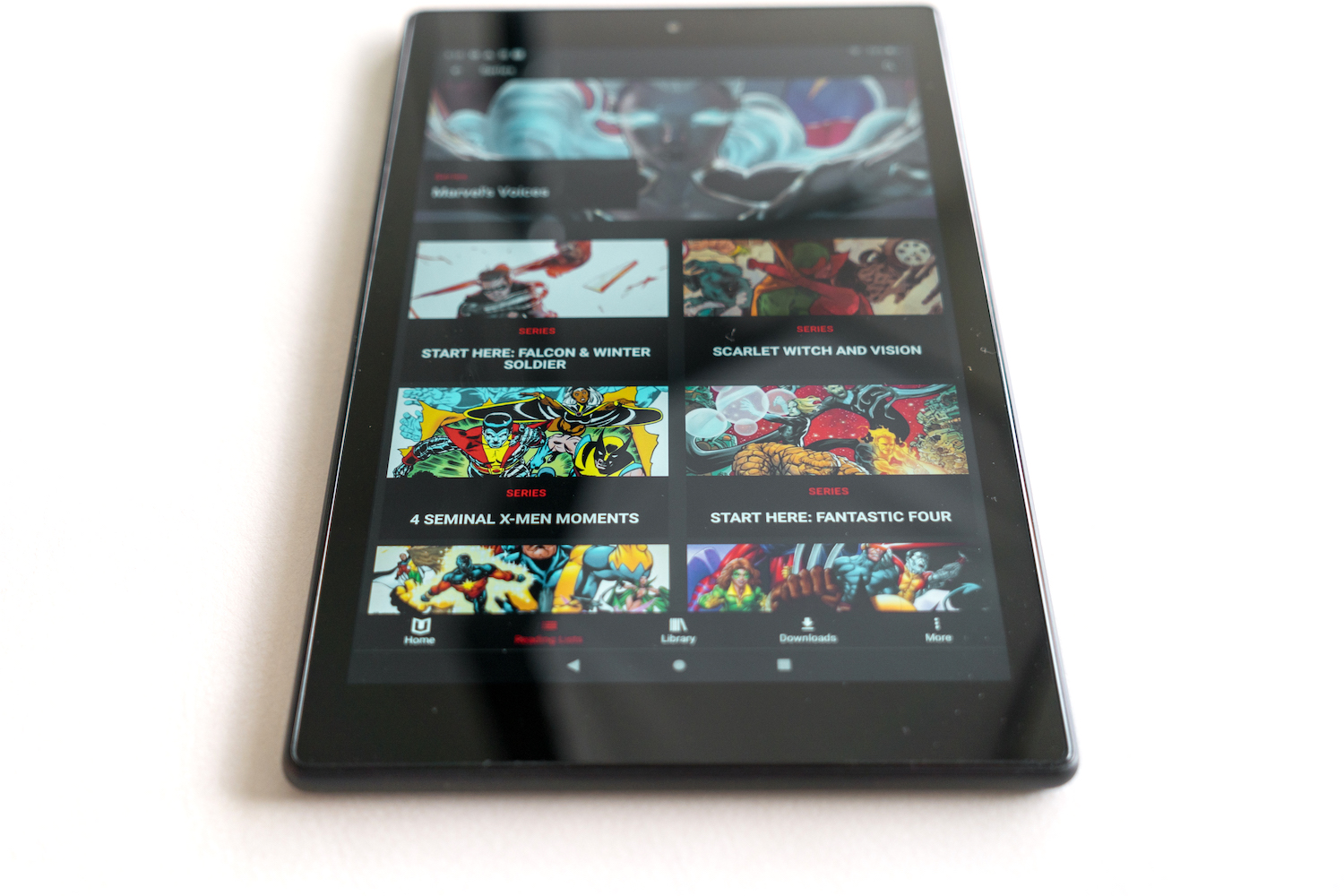 If you’re into the Marvel Comics Universe (MCU), the Marvel Unlimited app gives you a huge library of comic books to read through.

Marvel says it’s over 28,000 comics and counting, with new titles added every week. That’s a lot to sift through, only you wouldn’t be doing it by hand in a local comic shop. Think of this in the same vein as a video or music streaming service. Pay a fee and you can read as much of the content as you want.

With so many individual issues available, there are series’ going back to the 1960s. While the interface has its drawbacks insofar as finding some of the content, chances are good that whatever you’re looking for is actually there.

The main compatibility is with the apps for both iOS and Android. On Amazon Fire tablets, the Amazon Appstore doesn’t have Marvel Unlimited, so you would have to sideload the Google Play Store to get it on there. You can also access your account and the content library through a browser on a Windows PC or Mac. Even for comics you download, you would need to read them through the app or site, as they aren’t yours to keep indefinitely.

You can read or download anything so long as you have a Wi-Fi or data connection. Data is pretty minimal, though, which is probably why Marvel doesn’t have an option to use Wi-Fi only.

Marvel offers a free 7-day trial to use Unlimited, where you can browse and read whatever you want. It’s not a particularly long trial to get the full gamut of everything available, but it should be enough time to learn much of the interface and where everything is.

What you get as a Marvel Unlimited subscriber

When the trial ends, Marvel will immediately move you over to a monthly subscription. The listed prices are in U.S. dollars, so in Canada, you can expect to pay $12.99/month. But if you prefer to pay annually, which is $69 USD, you should be charged $100 CAD, bringing down the overall monthly average to about $8.33/month.

The third tier, Annual Plus, gives you an exclusive membership kit, including a 10% discount on Marvel merchandise at shopDisney.com. It does cost about $130 to get Annual Plus for the year, so the extra $30 (over and above the cost of a regular annual subscription) might be worth it if you tend to spend money on merch.

You can download and hold onto up to 12 comics in your library at any given time. You don’t have to download a book to read it, but if you do, it means you can read it offline, which is great if you’re commuting or somewhere with limited Internet access. There is a slight difference in purpose, though. If you select Add to Library, the comic won’t download to your device, it will just be in your library. Select Download for Later and then you can read it offline later.

I did find it annoying that I had to download issues singularly, rather than in bulk. And limiting them to 12 is also a head-scratcher.

The Home page has a search button called Browse that lets you search for anything available. It’s also broken down by series, characters, creators, comic events and publication date. As you scroll through the list, note that titles are specific. For example, while Amazing Spider-Man is listed under ‘A’, The Amazing Spider-Man is also listed under ‘T’. If a title has & instead of and, that also matters when doing a search.

For mainstream series’ that span decades, you may not find every single issue published, but the key ones will almost certainly be in there. That includes the most popular storylines and character appearances. The app will also group together issues for a particular story spanning multiple issues to make it easier to read in sequence. Unfortunately, it doesn’t do that for crossovers, where a story might continue in another character’s title. For that, you’ll have to dig to find it.

There’s a lot to wade through when you really start diving in. Aside from the main titles, Marvel’s Ultimate, 2099, Noir, Knights, New Universe, Mangaverse and MC2 are also included. Comics tied to MCU movies and shows, plus Marvel Age and Adventure books for kids are in there, too. However, others are missing, like Marvel’s mature MAX imprint.

There is no parental control here, so if you have kids who will use the app, you can’t filter anything on it. What is and isn’t appropriate for kids may be subjective when it comes to some of these characters, but that’s the gist here. Every title and issue is on the proverbial table, regardless of who’s reading.

You can read the issues with pages covering the whole screen, or using “Smart Pan” to get a Ken Burns effect in panning and zooming into different parts of the page for something more dynamic.

If you’re looking for new comics as they come out, don’t bother. To help comic book stores and other retailers selling them, new comics don’t appear in Marvel Unlimited until three months have elapsed. It used to be six months until Marvel cut it in half in October 2020. I should also note that Unlimited is wholly separate from the Marvel Comics app, which lets you buy comics digitally, including new ones. Unlimited has no integration with it, so if new comics are what you’re looking for, start there first.

Marvel also hasn’t actually integrated the app and site properly. Marvel Unlimited is just a part of the existing Marvel website. When you sign in, you have to search for the comic or series you’re looking for. While you can save something to your library, the site doesn’t know where you last left off, so reading from one platform to another never feels seamless. For that reason, I tended to just stick to the app and leave it at that.

Comics have long been an expensive hobby, but with new comics regularly selling for over $5.00 apiece, and back issues going for more in some cases, the monthly fee doesn’t seem so high. Even if your interest is limited to one series or character, this is one way to catch up. Or if you’re a collector who doesn’t want to flip open the actual physical copies, this is another way to do it.