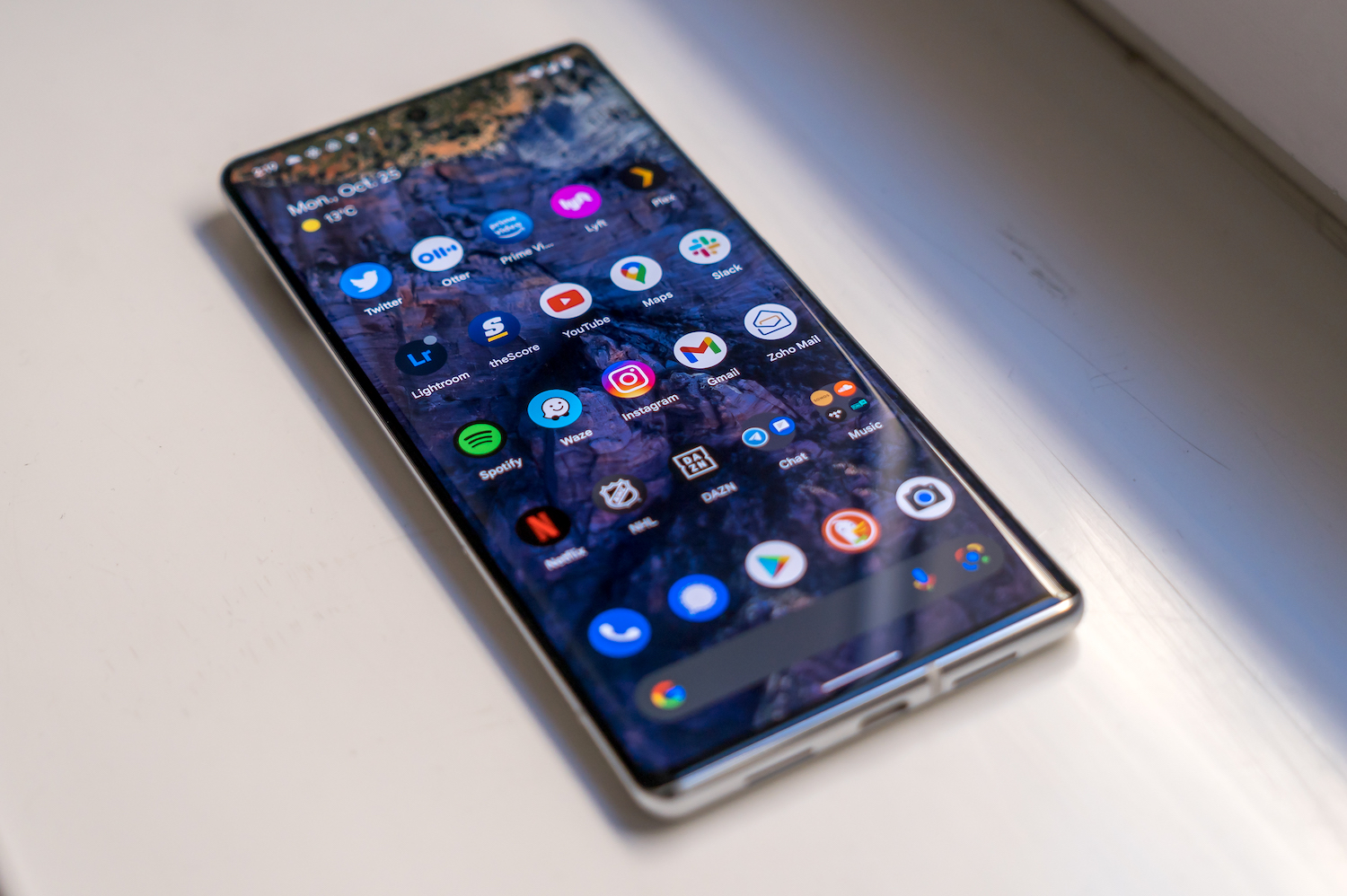 If you’re thinking this is the same old Google Pixel phone, you’d be mistaken, because the Pixel 6 Pro bears little resemblance to its predecessors.

After sticking to a largely similar design philosophy for the last few years, the company clearly pursued a different approach this time around. Not only is the phone larger, with a 6.7-inch AMOLED screen, it’s also running on Google’s own processor, the Tensor. Plus, you get an all-new camera array. The resulting performance is supposed to marry hardware and software in a more meaningful way. If done right, that would mean faster processing, rendering and better battery life.

Does it do all those things? Let’s find out.

Before I dive in, I should mention that the Pixel 6 and Pixel 6 Pro are built on the same architecture. They use the same Tensor chip, have 12GB of RAM, and offer the same storage options (128GB, 256GB, 512GB). Where they differ is on screen size, battery size and screen refresh rate. They also differ on cameras, with the Pro sporting a telephoto lens in the rear, and a wider field of view for the front camera. Note that both phones don’t come with a wall charger, only the USB-C cable and USB-A adapter.

The 6 Pro looks far more elegant than its predecessors ever could. Even the case Google supplied me with to protect it for this review is excellent. The 6.7-inch display (3120 x 1440) supports HDR10+ and offers a 120Hz screen refresh rate. Scroll and swipe on this phone and it feels smoother than before.

Both the front and back have Gorilla Glass Victus for rugged protection, but I always feel phones with glass on both sides need cases for protection. The good thing is that this kind of glass is better at resisting minor blemishes and scratches. Despite the size and extra glass, the 6 Pro feels relatively light, though at 210 grams, it’s on the heavier side compared to others.

The usual features also apply, like wireless charging, USB-C, eSIM and aptX HD Bluetooth audio codec support, among others. The newest features are mostly software-based, and built to leverage the “smarter” power coming from the Tensor chipset.

A processor isn’t something you typically notice unto itself, but rather what it does to everything else. It’s hard for me to quantify whether Tensor makes the 6 Pro 80% faster than the Pixel 5, but is it noticeably faster? Yes, it is. And it’s not just about the refresh rate, but also about how quickly you open apps, or how fast the camera functions. It’s just smoother from start to finish. There’s no doubt that the extra RAM helps when multiple apps are open, but I also noticed faster rendering when shooting or editing photos.

These are the kind of things that end up changing your expectations later on. When you use a phone that feels super smooth, it’s hard to go back to one that isn’t. If you own an older Pixel, you will understand exactly what the gap is here, but even if you don’t, you may also feel the same way.

Google says the Tensor chip enables the Pixel 6 Pro to do better real-time translation. Message with someone typing a different language and the onboard AI translates it. This works on the device, meaning you don’t need to have Internet access for it to work. You do, however, need to be online if you’re using Google Translate unless you download languages for offline use.

Voice Typing is also better this time around, noting punctuation, as well as name spelling, particularly when messaging one of your contacts. It’s pretty neat, and seems to work more accurately than before.

Google is touting the Pixel 6 Pro (and the Pixel 6) as its most secure phone to date. It’s hard for me to be sure of that, though I do appreciate knowing when an app is using the phone’s camera or microphone as it’s doing it. A green icon appears in the top-right, and that allows you to pull down the notifications pane from the top and turn off the camera or mic right away.

Google’s Titan M2 chip isn’t a phantom, it’s just not something you notice. The idea is that it works in the background, noting unusual messages you might receive, and helping you weed out spam callers through its existing Call Screen feature. Direct My Call simplifies how you can move past automated responses when calling customer service reps for any toll-free number. Wait Time projects how long you may actually be on hold before even making the call. Hold for Me, which isn’t new, uses Google Assistant to wait for someone on your behalf, alerting you when a person is on the line to talk.

Direct My Call isn’t in Canada yet, but Google says it will roll it out at some point. The rest of the security story is supposed to work in the background to stave off any potential attacks. This is passive in nature, but also shows you a few things.

Case in point, is the new Privacy Dashboard. Go to Settings>Privacy>Privacy Dashboard and you will see how many apps accessed your camera and mic in a 24-hour period. You can dive in to see which apps and at what time, and for how long. Under Privacy in Settings, you will also see toggles to completely turn off the cameras and mic for those times when you truly want to be private.

This is the key pillar for the Pixel 6 Pro, and it (mostly) delivers as advertised. Image quality is superb in a wide variety of settings and conditions. If you’re a total novice, you will likely impress friends and family with what you captured.

The main reason why is because Google equipped the device with a larger image sensor, and used its software expertise to utilize it. What you end up with are images looking crisp, detailed and colourful. The company added a colour temperature slider to the camera interface to make images cooler or warmer in tone. It also added Motion mode to shoot action, where you pan on a subject, while everything else blurs behind them. Long Exposure lets you capture scenes, blurring moving parts of a photo for effect. It’s best to do it while staying as still as possible, but results can look great when you do.

The larger image sensor for the main camera does a good job day or night, but there is a catch. The sensor says 50-megapixels, but images are actually 12.5-megapixels through pixel binning, where smaller pixels combine to form larger ones. The advantage in doing that is that it’s easier to pull in more light. Doing this is largely why Google claims the Pixel 6 Pro can pull in 150% more light than the Pixel 5.

Can it? Well, it’s hard to tell. Is it easier to shoot in low-light and at night? Absolutely. Dynamic range is also better than the iPhone 13 Pro models, so there’s that. Portrait mode is still very good, as is Panorama when you need it. The iPhone, however, is better when it comes to shooting video.

Lastly, the ultra-wide and telephoto lenses perform well. They use different sensors, so won’t pull in the same amount of light, but are still solid. At 4x zoom, the telephoto lens is excellent in good conditions, while the 20x Super Res hybrid zoom was surprisingly better than I expected.

Magic Eraser is a new tool, though it’s more for Google Photos, not exclusive to the Pixel 6/6 Pro. It works better than I thought, assuming you’re removing elements from photos that less detailed. Try it out on your current Pixel to see how well it works.

This was a hurdle Google had to hop over for the simple fact it had been such a problem in the past. The Pixel 4, in particular, was very unreliable, and the Pixel 5, while better, was never amazing. So far, after testing the phone for a week, I can say the battery does hold up significantly better. I was able to get through a full day and still have power left after taking and editing photos all day. I could even make it into the following morning before having to charge.

It helps to have a large 5,000mAh battery, but there may be something to Google’s claims about Tensor. I’m staying cautious because I’m not sure yet if battery life will hold up like this longer-term. So far, so good, though.

An excellent camera that happens to be a phone

At $1,179, the Pixel 6 Pro isn’t cheap, yet still comes in cheaper than flagships from other brands. The regular Pixel 6 starts at $799, making that an even bigger bargain, so long as you’re okay with what it’s missing. Android runs well on any Pixel, and with five years of guaranteed security updates, Google is committing to these devices. It’s just a shame that there are only three guaranteed Android updates, so Android 15 will be the end of the line for them.

In the end, you can’t go wrong with either of these phones. Easy to use, and capable of capturing some of the best photos, they’re easy to like. If you care a lot about the camera, go with the Pro. If not, go with the regular Pixel 6.