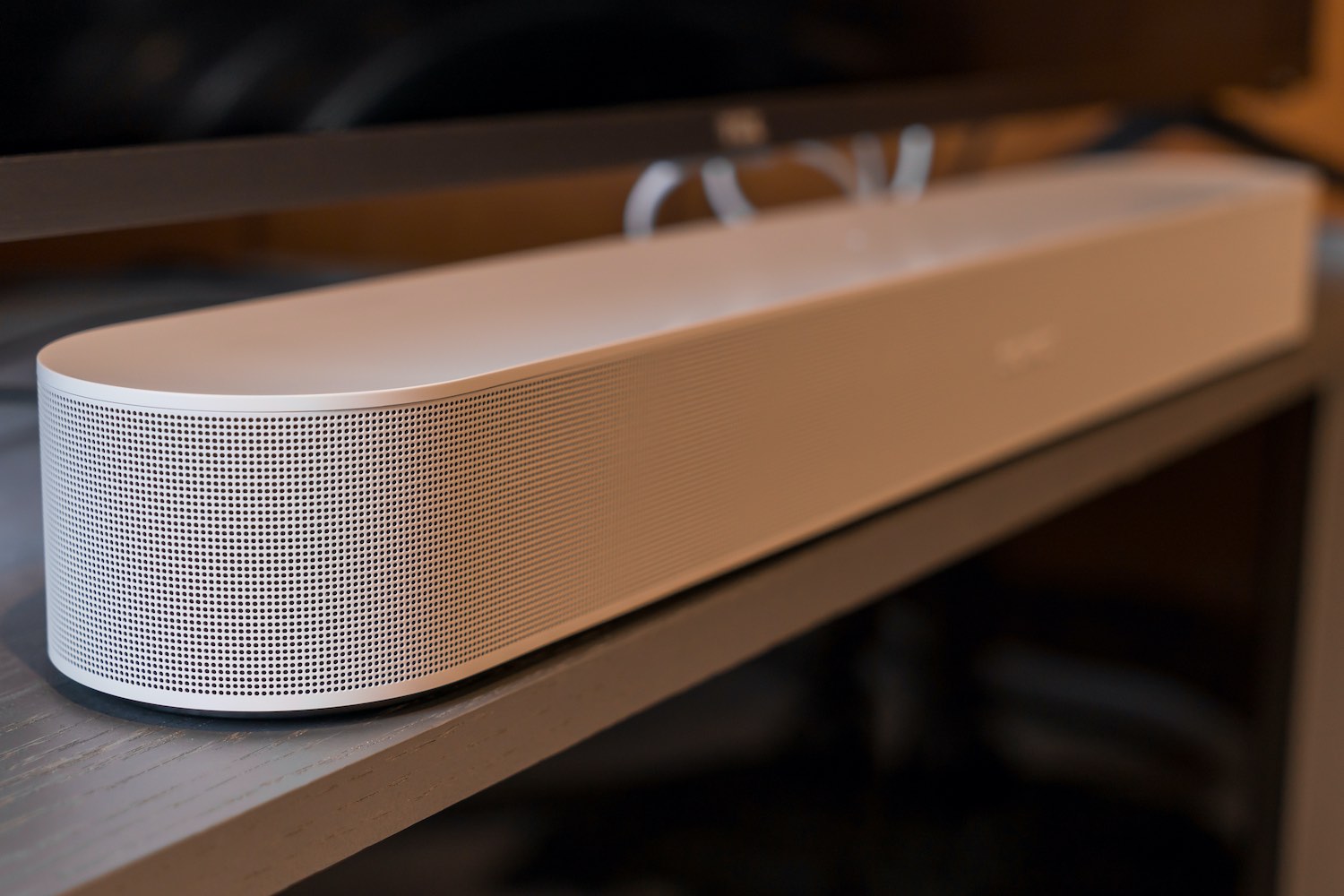 Sonos is back with its second-generation Beam, the company’s smaller soundbar that features modest upgrades over the original.

When Sonos launched its first Beam, it was trying to address a missing piece of its product line. It had already done a full-sized sound bar in the 2013 Playbar, and another flat type in the 2017 Playbase. The Beam was an alternative to both, and one that could realistically fit under — or in front of — any TV.

Despite its smaller footprint, the first Beam didn’t have one key thing Sonos users wanted: Dolby Atmos. The Beam (Gen 2) has it, and along with a few other new pieces to boot. It’s hardly an overhaul, but it is something that better fits with current home theatre setups. At $559, it’s also not especially cheap, even by smaller soundbar standards.

Here’s a quick video rundown of all the latest features:

Before I get into the stuff under the hood, I should note the cosmetic changes on the outside. Sonos ditched the fabric cover from the original and replaced it with perforated plastic. While you would think fabric would give it more elegance, I believe the opposite to be true in this case because the newer look makes it more uniform. This iteration of the Beam comes off looking like one big piece of unitary gear.

The controls and ports are the same, except for a key change in the form of eARC. Plug this into the TV’s HDMI ARC port and the two speak the same language, which is to get the best possible audio out of the sound bar automatically. The touch-based controls on the top are pretty much the same, including swiping to skip or repeat tracks.

Sonos did put in a new processor inside to handle things. The company says it’s 40% faster, though the extra muscle is more about pushing more of the surround effects from the existing speakers. And by ‘existing,’ I’m referring to the fact it’s the same speaker array as the original Beam. Four woofers, three passive radiators and a centre tweeter round out the array.

What’s notable about this is that Sonos chose not to alter the design to look more like the Arc, it’s larger sound bar. That unit has upward-facing speakers to bounce off ceilings and create more of a virtual effect. The Beam (Gen 2) has everything facing forward and to the sides angularly. That’s where the processor and sophisticated algorithms come in to trick your ears.

Thing to know about the setup

Before I get into performance, I do want to address the setup process. If you’re new to Sonos, you won’t run into problems. Just download the latest Sonos app (the one with the gold icon) and go through the steps.

For me, as a long-time user, I ran into issues when I tried to set up the Beam (Gen 2) to replace the original Beam. My mistake was unplugging and removing the original Beam. What I should’ve done was factory reset it and then disconnect it. The problem is that the Sonos app doesn’t make it straightforward to remove it from an existing Sonos system. The original Sonos app did, but not the current one.

Long story short, I got nowhere with my Android phone and had to use my iPhone to get everything going. What was supposed to be a minutes-long process turned into a 45-minute nuisance. Once I was up and running, everything felt right where it should and the Beam (Gen 2) was ready to rock.

One of Sonos’ signature features is Trueplay, where you “tune” the speaker and optimize it for the room you’ve put it in. You can only use Trueplay with an iPhone, but unfortunately, you won’t be able to with an iPhone 13. This applies to all four of the iPhone 13 variants, including the Pro models, until Sonos releases an app update to support them sometime this fall. To make it work, I had to use an older iPhone 11 and get Trueplay going that way.

As for Dolby Atmos, Sonos finally added something users clamoured for, but I’m not sure the design fit with the feature. Atmos works best when you either have a proper surround sound setup with multiple speakers, or with at least a speaker or sound bar that can fire up as well. It’s how the sound soars above that helps make the feature what it is.

With the Beam (Gen 2), the speakers don’t aim that high, so there are unique algorithms that make it feel like sound may be coming from above you. It’s a fleeting feeling, though, and largely because of the physics involved. You can use virtualization to pretend that sound comes straight out, jumps up and then falls down towards the listener. But the practicality doesn’t always sound the way it was intended.

When I tried it with shows or movies supporting Atmos, I noted more of a wide soundstage, rather than an enveloping one. For example, in a helicopter chase scene, gunfire and missiles that fired from one side of the screen to the other zoomed across the room out of the Beam. It was a spacious sound that belied its size.

My home setup also has two Sonos Ones as rear left and right channels. When I used the Beam without them, I was still impressed with the spaciousness. When I used them together, the Beam felt more pronounced at the centre, but not so much from above.

Despite that, the Beam (Gen 2) is a night-and-day experience if you’re coming from TV speakers alone. As TVs get thinner, their audio continues to get worse. If you have an older TV, you’re also in luck because this sound bar comes with a Toslink optical audio-to-HDMI adapter. Dolby Atmos can’t work through a Toslink connection, so you do lose that, but you ultimately gain in audio quality.

Does the Beam (Gen 2) sound dramatically different from the original? I wouldn’t say so, though I do think the spaciousness is more obvious. The original Beam did well with projecting great sound, only that it didn’t cast as wide a range. The Gen 2 model does, even if it’s virtual upward-firing magic isn’t all that potent.

You also notice this if you pair the Beam with a Sonos Sub or two Sonos speakers are rears. The Sub will give you the kind of bass the Beam could never produce on its own. The rear speakers can deliver more of a surround sound setup. And you can do that with Sonos Ones, Sonos Fives or the Ikea Symfonisk bookshelf speakers.

For music, the Beam (Gen 2) is great. You don’t need to be sitting right in front of it to enjoy it. Stream music to the sound bar from apps that natively support it (Spotify), or do so through the Sonos app. With support for AirPlay 2, you can also watch video on a phone or tablet, and hear the audio through the Beam. I’ve always found it a great way to play mixes or live performances from YouTube.

Voice assistants with the Beam (Gen 2)

Like any Sonos speaker these days, the Beam (Gen 2) supports both Amazon Alexa and Google Assistant. You have to choose one of them, but can always switch if you want to later. No real surprises here, other than that the microphones seemed to be a little better at picking up my voice. That’s great for accuracy, but also found false positives tended to happen more often.

A worthy update, not an upgrade

The Sonos Beam (Gen 2) is a worthy upgrade if you’re coming from an older sound bar that isn’t cutting it, or from your TV speakers. It’s not worth the upgrade if you have the original Beam, unless you really want Dolby Atmos. The differences aren’t stark enough to deem it an “upgrade” in the grand scheme. An iterative update, sure, but hardly an overhaul.

You won’t be disappointed listening to anything coming out of it, for the most part. Atmos carries different expectations, and upward-firing speakers would’ve served the Beam better that way. I’m just not sure there was room for them inside such a compact chassis. Either way, for $559, it’s a good investment when you need a big upgrade to better hear your TV and music.